Which Dogs Bite The Most In California?

Home » Which Dogs Bite The Most In California?

Millions of California residents share their homes and their lives with their dogs. Dogs are great companions and often prove to be the most reliable member of the household. Unfortunately, dogs that are improperly cared for or even taught aggressive behavior can become a dangerous threat to adults and especially children.

Dog bites cause severe injuries to thousands of victims each year across the nation. And California routinely leads the country in fatal dog attacks. 2021 official dog bite figures are still being verified and tabulated. But with at least one fatal dog bite case already reported in 2022 in Los Angeles County, it appears rates aren’t likely to decline anytime soon.

It’s fair to wonder what breeds of dogs account for the most dog bites in the U.S. and California. Maison Law of California examined the most recent data on dog attacks to hopefully encourage pet owners to show more caution when raising and caring for a dog.

Dog Breeds Responsible for the Most Attacks in California

The American Veterinary Medical Association finds that there are over 4.5 million dog bites recorded in the U.S. each year. More than 800,000 victims seek medical attention for their wounds.  And sadly, at least half of dog bite victims are children.

Any dog can pose a bite threat to humans, but the biggest animals with the strongest bite force put people at the most risk to lose their lives.

National Pit Bull Victim Awareness reports that over a 7-year period in California, pit bull attacks claimed 25 lives. These attacks happened in places like Fresno County, San Bernadino, and Modesto and in every corner of the state.

Across the country in 2020, there were 46 dog-bite-related deaths documented by Dogsbite.org. The data shows that pit bulls were found responsible for an overwhelming number of fatal dog bite cases for the year. Dogs identified under the umbrella term of pit bulls were blamed for almost two-thirds of the fatalities that occurred in 2020. 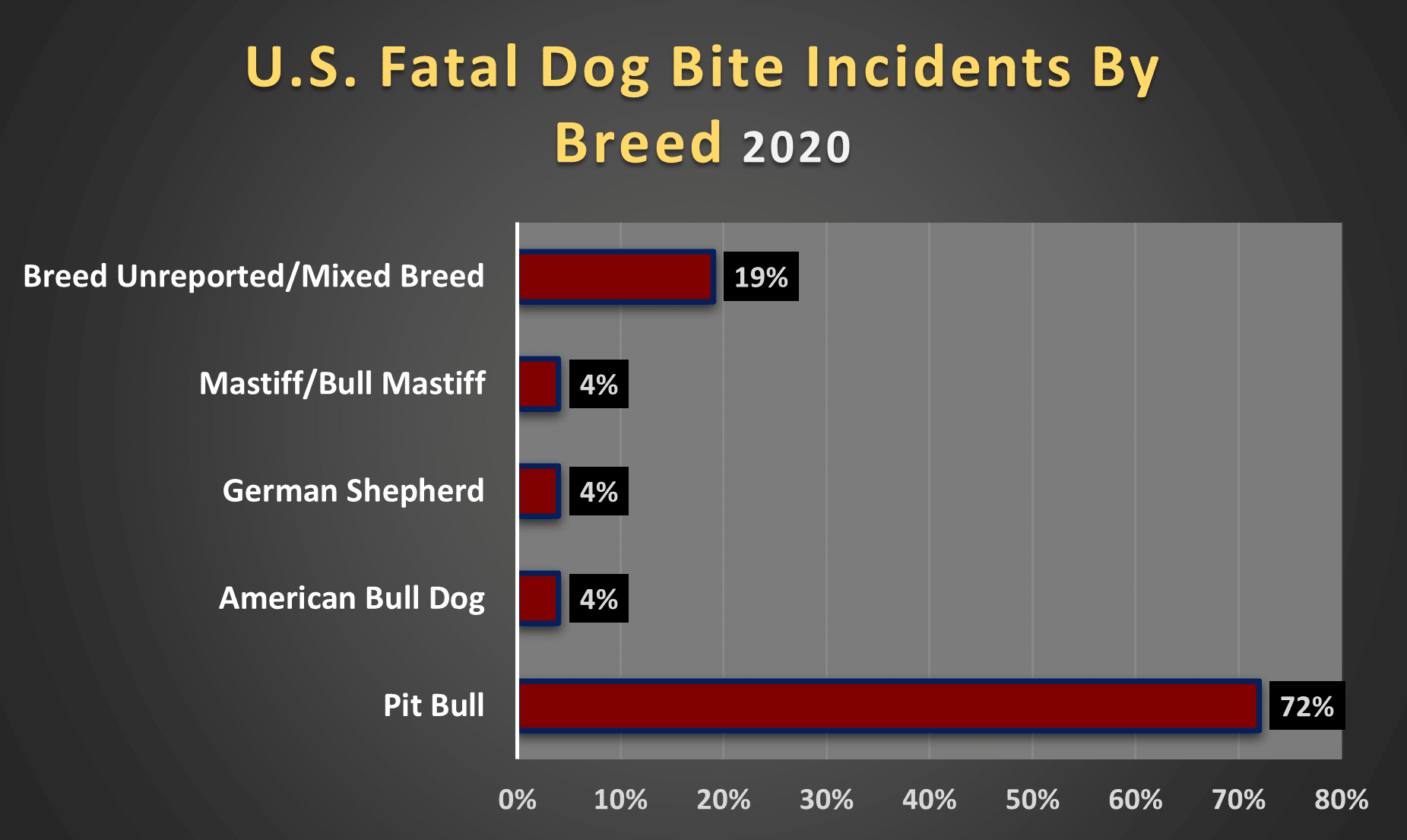 Dogsbite.org also commissioned a study of 16 years’ worth of dog bite data. Over that span, a tragic 568 people were killed by dog bite injuries in the U.S. Rottweilers and German shepherds were near the top of the list of fatal dog bite culprits. Pit bulls, again, topped the list with an overwhelming number of deadly attacks attributed to them. 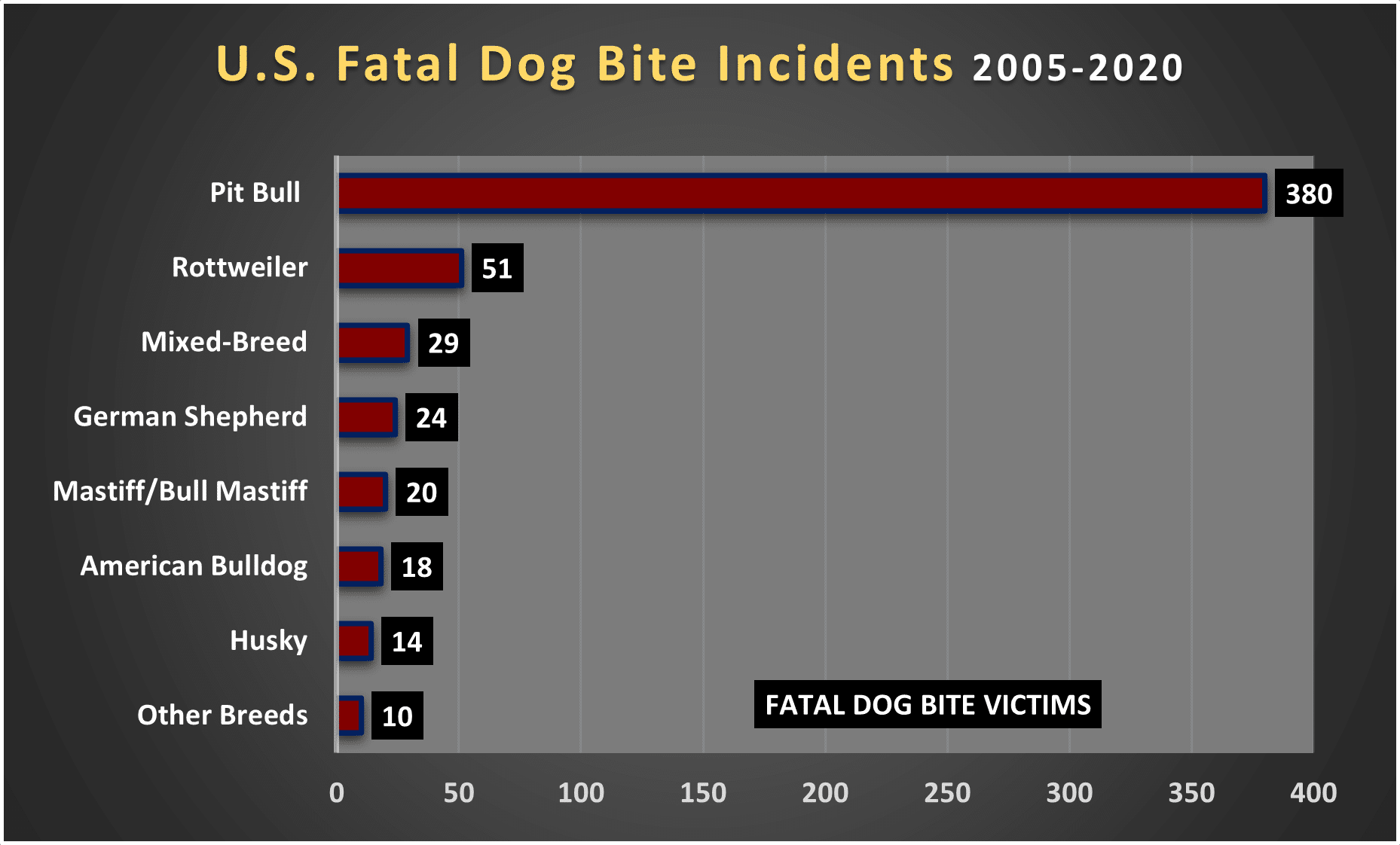 In California, attacks from pit bulls and other breeds claim lives each year. In fact, California has ranked among the top five states for fatal dog attack cases for over half a decade. The state led the entire nation in dog bite-related deaths in 2019 and 2016. 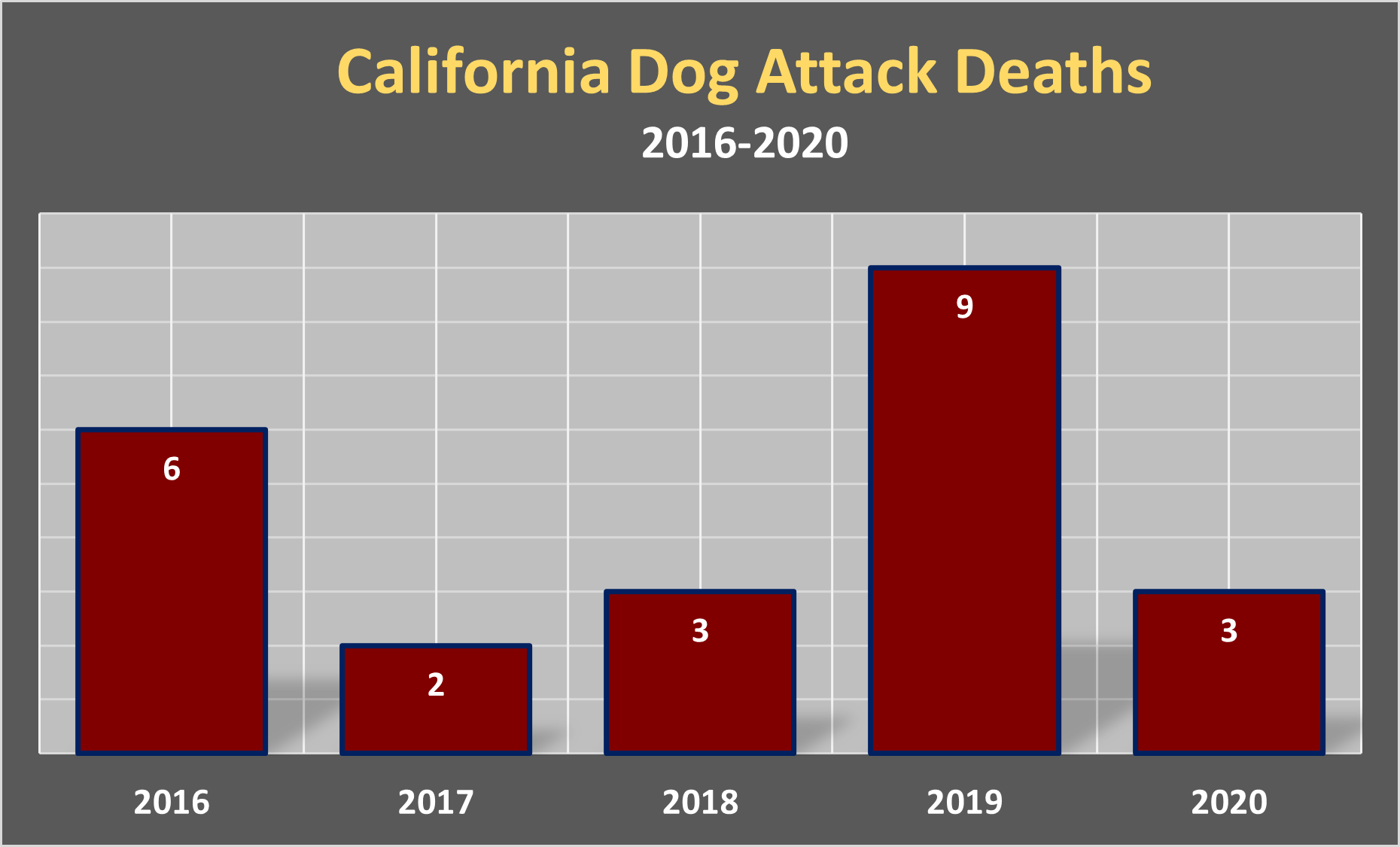 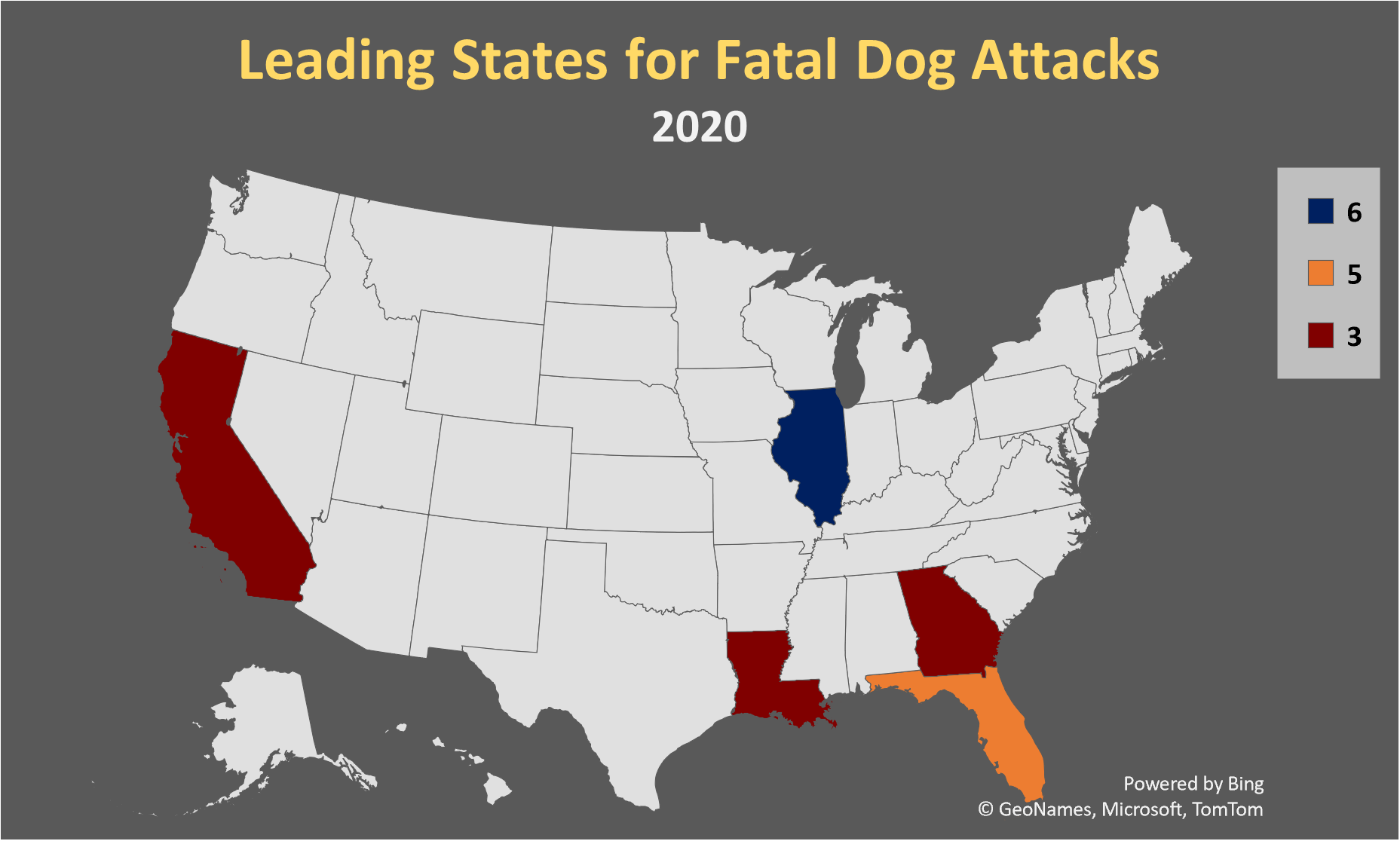 What’s more, State Farm Insurance released their 2021 data on states with the most dog bite-related injury claims. California ranked first with 388 claims totaling 23 million dollars in settlement money. Illinois was third with 290 claims filed and 16.6 million dollars paid out. Ohio ranked third with 172 claims for 2021 with 6.8 million paid out.

The City of San Francisco estimates that almost a quarter of a million dogs live in the city. In a single year, there were over 300 reports of dog bites in the city.

San Diego County documented 7,600 bite reports over a three-year period. Researchers found that pit bulls were blamed for the most bites for a total of 851 incidents. German shepherds were second on the list and were responsible for 349 bite cases.

A public health study found that over three years in Los Angeles County there were 23 ,103 dog bite incidents reported. Interestingly, those researchers determined that dog bites most often took place between 4 p.m. and 8 p.m. They also confirmed that the most animal bite cases in Los Angeles County occurred in July.

The United States Postal Service (USPS) says that more than 5,400 of its employees were attacked by dogs in the United States in 2021. It’s a frightening fact of life for postal carriers and a major problem for the USPS officials trying to keep their workers safe.

In their latest yearly update, California ranked well ahead of every other state for attacks on mail carriers. They nearly doubled Texas for bite incidents in 2021. Ohio, Pennsylvania, and Michigan rounded out the list. 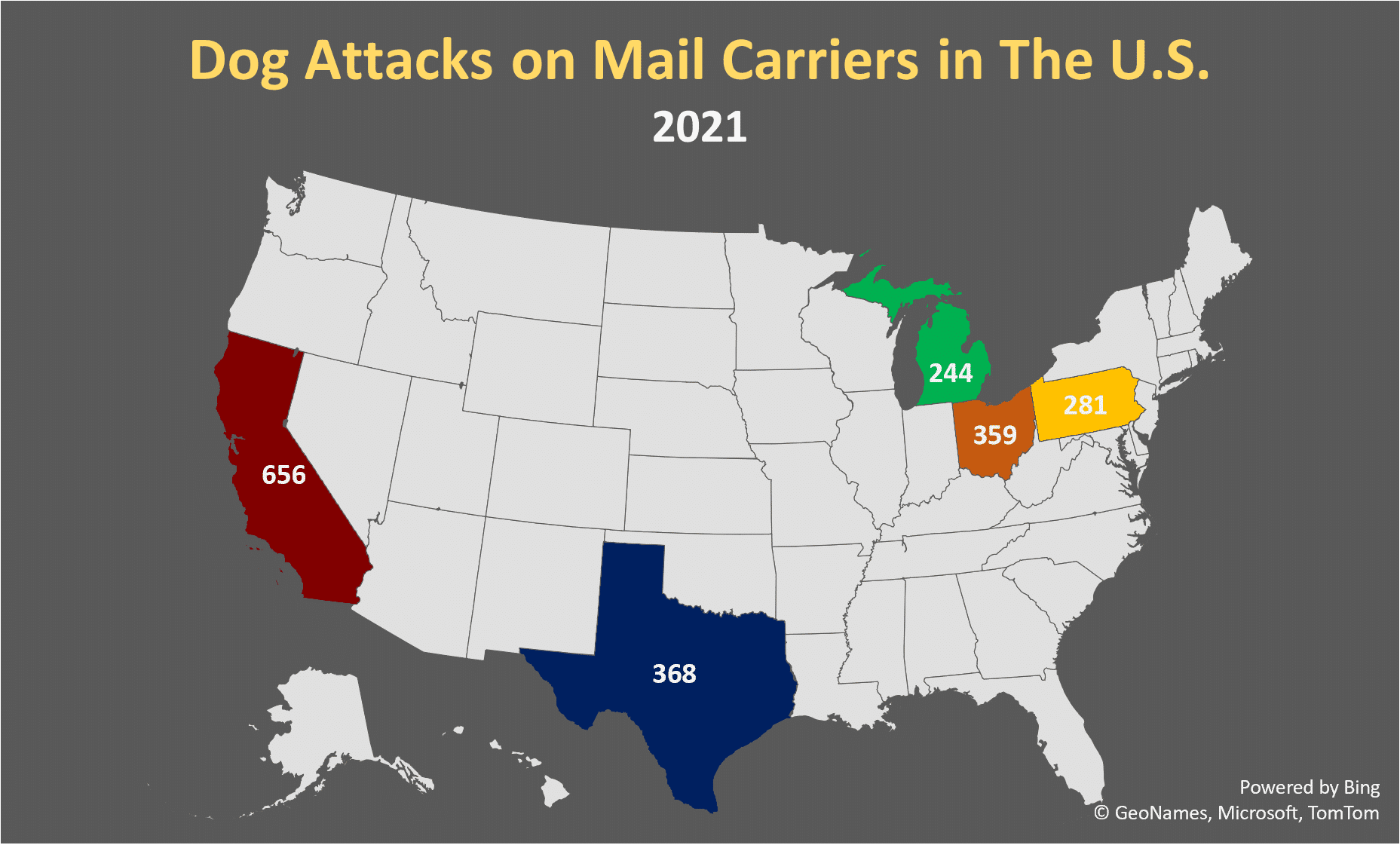 Los Angeles, in particular, made the USPS list of cities ranked worst for mail carrier safety from dog bites. Los Angeles placed fourth overall on the list with 44 attacks reported. San Diego almost made the top ten on the list and was ranked 11th with 31 attacks in 2021. 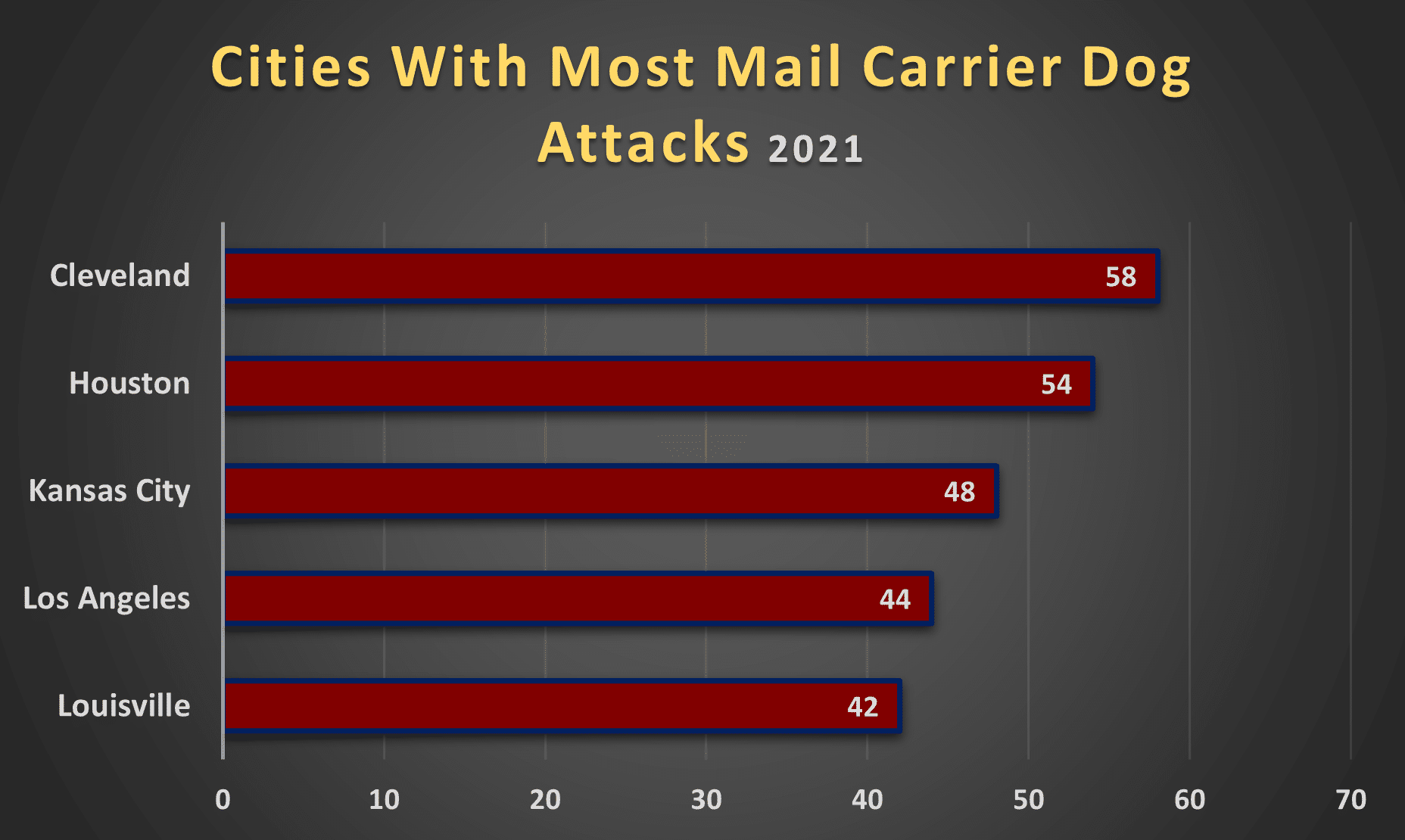 California is a “strict liability” state and that means dog owners can be liable for any bite, even when the dog has never shown aggression before. Victims often suffer permanent disfigurements, and permanent disabilities, and even risk losing their lives in these attacks.

That’s why it’s critical that victims and their families hold dog owners and their insurance providers responsible for every physical, emotional, and financial hardship they face. There are benefits available to dog bite victims that insurance companies won’t always mention.

You can visit the Maison Law dog bite page to find out what to do if you or a loved one are the victim of serious dog bite injury anywhere in California.