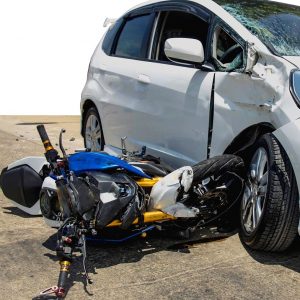 If you or a loved one was injured on a motorcycle in Visalia or anywhere else in the central valley, contact us today for a free consultation.

Like anybody else on the road, motorcyclists are at risk of being injured or even dying from injuries suffered in a motorcycle crash. Motorcycles don’t have rollover avoidance technology or reinforced roofs to protect riders though. They don’t have steel frames and bodies, bumpers, crumple zones, air bags and seat belts to protect riders either. In fact, other than a helmet that’s required by state law and maybe some leathers, motorcyclists in and around Visalia or anywhere else in California are virtually unprotected in the event of an accident. As per the National Highway Transportation Safety Administration (NHTSA), motorcyclists are 28 times more likely to die in an accident as opposed to the occupants of a passenger car. The NHTSA estimates that 80 percent of all motorcycle crashes result in injuries or death. That estimate might be low.

Many Motorists Just Don’t See Them

One study that was performed for the NHTSA at the University of Southern California found that after crashing with a motorcycle, the drivers of the vehicles who caused the crashes frequently remarked that they either didn’t see the motorcycle approaching, or they didn’t see it until it was too late. That study also found that on the average, motorcyclists had about two seconds to try and avoid the impact.

Some Common Causes of Motorcycle Crashes

Increased traffic congestion in Visalia, Tulare County and the San Joaquin Valley contributes to motorcycle injuries and deaths in the area, but other factors figure into the motorcycle wreck equation too. Here are some of the common causes of motorcycle crashes:

Given the vulnerability and exposure of motorcyclists, their injuries are usually serious when they’re involved in an accident. The lives of many victims will be forever affected. Here are some of those injuries, any of which could require multiple surgeries:

The damages flowing from those injuries can include past and future medical bills, past and future lost earnings, any permanent disability or disfigurement, pain and suffering and loss of a normal life. Our job is to pursue those damages for you while you recover and reach maximum medical improvement.

A wrongful death occurs when another driver causes an accident involving a motorcyclist, and the rider dies from the injuries that he or she suffered in that crash. Two different categories of damages are usually raised in these types of cases, but they’re addressed in a single wrongful death lawsuit. Some of those damages follow:

In both the insurance industry and general public, there is a strong bias against motorcyclists. They’re often perceived as reckless risk-takers, especially here in California where lane splitting is perfectly legal. Most riders are fully aware of what can happen to them when they’re on a bike, so they exercise due care and caution for their personal safety by avoiding risky behavior. That might not be how jurors see motorcyclists though. If a motorcycle accident case goes to trial, there are some jurors who believe that motorcyclists have the same right to the road as other vehicles. They’re willing to give an injured motorcyclist or the estate of a deceased motorcyclist a fair trial. Regardless of the fact that they might openly deny bias, other jurors can be more difficult. A great attorney may even get a juror removed from consideration based on bias.

After a motorcycle accident that involves severe injuries or death that was caused by somebody else, the opposing insurer knows that it faces the possibility of a big financial loss. They will likely do whatever it can to pay you as little as possible or even nothing at all. Expect them to be dismissive of your claim and use anything that they can against you. That includes any statements that you might make to them out of court.

California law doesn’t require you to talk or cooperate with that opposing insurer, so rather than doing that and damaging your case, contact us first to arrange for a free consultation and case review. When evaluating your case, we’re going to listen to you carefully and examine all of the facts. Then, we’ll answer your questions and advise you on the viability of all of your legal options.

Contact a Visalia Personal Injury Lawyer right away after being injured or losing a family member as a result of the carelessness and negligence of somebody else anywhere around Visalia.