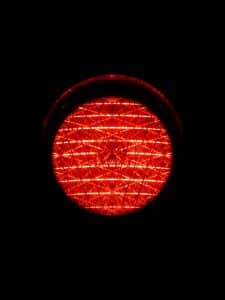 A power outage at a Fresno intersection can leave traffic lights dark and drivers very confused as to what to do. Without a police traffic control officer on the scene, there are guidelines as to how motorists should proceed through a darkened intersection.

These traffic codes also mean that drivers can be found at fault in a collision, even when no traffic lights are on. A driver still must travel slowly enough, stop, and proceed at speeds safe for conditions as to prevent an accident. When these rules are ignored, careless drivers can be called upon to help anyone injured in an accident with the costs of recovery.

Two vehicles collided in an intersection experiencing a power outage Tuesday night and two people wound up in a Fresno hospital. KSEE-TV reports the accident occurred on Tulare Street and Chestnut Avenue in eastern Fresno on November 1, 2022.

Fresno Police responded to the scene sometime around 9 p.m. They determined that two vehicles entering the powerless intersection had failed to make a complete stop and collided. The impact left one car in the front yard of a house.

Two people in one of the vehicles were hurt and rushed to the hospital. Police haven’t said who was at fault in the accident and continue to investigate.

Help for Victims After a Fresno Intersection Accident

Surviving victims in frightening collisions can face long injury recoveries and enormous medical bills. Medical care may be needed for much longer than a night in an emergency room and additional surgeries or physical therapy may be required for months to come.

After police assign blame in an accident, injured victims can request financial support from an at-fault driver’s car insurance policy. This support should cover all medical expenses. The compensation is also intended to help keep healing victims afloat financially while they may miss days or weeks of work.

If you or a loved one was the victim of a careless driver, don’t allow an insurance adjuster to determine how much support you should receive. They work for their insurance company and want to save money for their shareholders. Your family’s financial security after a tragic accident is much more important than their profits.

To make sure you and your family are protected from an insurance company’s unfair practices, contact an experienced Fresno Car Accident Lawyer such as Martin Gasparian for a free case consultation. Mr. Gasparian works closely with victims and their families to earn them support as they rebuild their lives.