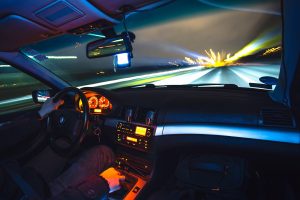 Drivers traveling before the sun comes up in Fresno can be especially prone to carelessness and end up in the path of other vehicles. These lapses in attention can be caused by a motorist checking a text message or perhaps driving while sleepy.

A safe driver may fail to anticipate someone not paying attention and be unable to avoid a car coming directly at them. These mistakes on city streets can cause serious injuries and leave victims with massive emergency room and doctors bills.

One victim was taken to the hospital after a car crash in northwest Fresno, early Wednesday morning. FOX26-TV reports the accident happened on Golden State Boulevard at Shaw Avenue on October 12, 2021.

Fresno Police responded to the scene shortly after 4:45 a.m. The collision involved two vehicles. A car suffered front-end damage and an SUV took damage around the driver’s door.

One occupant was trapped in a vehicle, but emergency crews were able to free the victim. The person was then transported to a local hospital.

Police investigators have not said what may have caused the collision

Support for Victims After a Fresno Collision

The victims of car accidents should always get checked out by paramedics, no matter how minor they feel their injuries are. In the moments after an accident, it is the worst time for victims to try to assess how badly they are hurt.

The shock of a collision and the adrenaline released can mask the effects of an injury. What may seem a minor inconvenience at the time, can transform into a painful and serious injury in the days that follow. When additional pain arises the morning after an accident, victims should see their physicians to get all injuries documented.

When an injury intensifies and ends up racking up enormous medical bills, the insurance companies for at-fault drivers need to be held accountable. Victims are owed full support for expensive medical treatment and should also be supported while they miss valuable time at work over an injury.

Injured victims often don’t know how much their injury is worth and insurance companies can take advantage of this fact. They can work to talk a victim out of filing a claim or move to provide far less in compensation than a victim will need to fully recover.

After your or a loved one has become the victim of a careless driver, reach out to a Fresno Car Accident Attorney for a free consultation on your best options and to learn about your rights.