This page will be continuously updated with the latest bicycle accident statistics from Los Angeles and California.

The Numbers Behind the Dangers for Los Angeles Cyclists

People are drawn to Los Angeles because it is a city that is always in motion. The fast pace of life in La-La Land can have its drawbacks though, especially for cyclists. All that momentum often spills out into the streets in the form of speeding and careless drivers trying to get from one famous neighborhood to the next.

Someone on a bike can face distracted drivers, confusing lane markings, and rough patches of pavement all in a single block. These hazards threaten the physical health of bicyclists and claim precious lives every year. If we are able to step back and visualize the heartbreaking bicycle accident numbers the city records each day, perhaps solutions to provide safer rides will emerge and be acted upon more quickly.

The City of Los Angeles tragically lost 10 lives in 2020 bicycle collisions with 1,369 bicycle injuries reported. That’s according to California’s Transportation Injury Mapping System (TIMS). Over the past several years in the city, it was 2015 that saw the highest single year of bicycle accidents involving injuries with 2,145 victims. Over that same time, 2018 was the deadliest year for bicycle accident victims. 22 people tragically lost their lives. 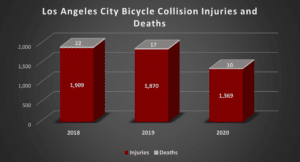 Bicycling.com recently called Los Angeles the worst bike city in America. They cited factors like notorious traffic levels and poor pavement conditions and a few other factors that Bicycling.com called out as the biggest hazards of all, “they are hostile, speeding, or distracted drivers, and a legal system that goes easy on them.”

Bicycling.com also pointed out that data on accidents from 2014 to 2016 shows Los Angeles County itself had more cycling fatalities than most states over that span, other than Florida, New York, and California.

Across all of Los Angeles County, 2020 brought with it 2,528 bicycle accidents leading to 23 tragic deaths (TIMS). Keep in mind those heartbreaking figures came during a year under quarantine and with dramatically less traffic seen on L.A. streets and freeways.

Since 2016, L.A. County has seen an average of almost 3,400 bicycle accidents each year. Injury rates across the county have seen a steady decline over that span, with the highest collision rate recorded in 2016. (CATSIP)

Since 2016, Los Angeles County has averaged 36 bicyclist deaths a year. The highest death toll was seen in 2019 with 42 victims.

Orange County ranks second overall among California counties for bicycle collisions reported from 2015-2019 with 4,570 cases. For comparison to Los Angeles County, here is a list of Orange County’s bicycle accident fatalities tracked over five years. The county ranks near the top in fatalities. Still, the data shows the wide gap between Los Angeles County and the other 58 counties in The Golden State.

Over five years, Los Angeles County ranks number one from 2015-1019 with over 18,000 total bicycle accidents. Surveying some other Southern California Counties like San Diego shows the disparity that exists between L.A. and the rest of the region. (UC Berkeley)

The Most Dangerous Neighborhoods for Cyclists In L.A.

Downtown Los Angeles was overwhelmingly the most hazardous place in the city for cyclists. The area saw 210 bicycle accidents in 2019, up one and a half percent from 2018.  Historic South Central was a distant second with 80 accidents in 2019, up 5.3% from the year before. Bicycling collisions in Koreatown in 2019 were down 10% from 2018. (Crosstown)

Most Dangerous Intersections in Los Angeles

Crosstown also singled out the most dangerous intersections in L.A. according to accident rates. These places are hazardous not only for cyclists, but for other micromobility users, pedestrians, and motorists as well.

The worst crossroads is where Sepulveda Boulevard meets Sherman Way in Van Nuys.  16 lanes of traffic converge here. In 2019, LAPD documented 47 traffic collisions around the intersection.

The second worst intersection is Manchester Avenue and Figueroa Street in Vermont Knolls. The crossroads has an accident rate just under Sepulveda Boulevard/Sherman Way.

The third most dangerous crossroads is at Sepulveda and Burbank Boulevard, also in Van Nuys. The intersection saw 40 collisions in 2019.

Bicyclists in California are not required to wear a helmet if they are 18-years-old or older. The National Safety Council estimates that helmet use reduces the risk of head injury by more than 50% for cyclists. When talking about preventing severe head injuries, the protective benefit is even higher.

When the age of bicycle accident victims in the City of Los Angeles is totaled, it’s easy to see how injuries are spread out among the age groups and who is involved in the most collisions. Cyclists in their twenties appear to make up the majority of riders traveling city streets and therefore are the victims of the majority of crashes. 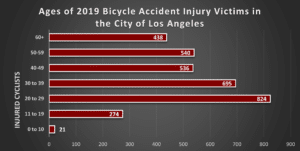 At Maison Law, we want safer rides for every cyclist. We defend the right of bicyclists across Southern California and make sure drivers don’t escape the consequences for their careless and reckless acts.

We hope you are fortunate enough never to come in direct, physical contact with Los Angeles traffic, but if you or a loved one are in an accident caused by a careless driver, here are a few things to remember.

If you’re able, try to take photos of the accident scene, especially the damage to your bike and the vehicle involved. Get images of street and traffic signs. Take photos of any visible injuries. If you are unable to move about, ask someone with you or a helpful witness to take photos for you.

Make sure to get information from witnesses and look around for any possible security cameras that might have recorded what happened. Don’t throw out your damaged bike or any damaged clothing or personal property. They can all serve as evidence.

If you are ever hurt in a bicycle accident caused by a careless driver please feel free to contact us for a free consultation. Our goal is to support and protect victims through recovery and get them back on their bikes again as soon as possible.