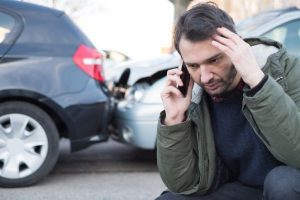 Drivers under the influence of a drug or alcohol can create chaos on local streets and leave other motorists unable to predict their actions and steer clear. DUI drivers make a dangerous choice when they get behind the wheel while impaired and the poor decisions rarely end there.

Drivers traveling while their judgment is compromised can make a traffic error that leads to a dangerous crash. They can then choose to flee the scene of an accident, leaving victims with injuries and perhaps waiting on medical help that might be delayed.

A man arrested on DUI charges has been blamed for a three-vehicle accident Tuesday morning in northern Fresno. Yourcentralvalley.com reports the collisions occurred near the intersection of Friant Road and Shepherd Avenue on July 6, 2021.

Fresno police say a driver under the influence ran a red light and struck two other vehicles. The suspect then made a U-turn to head southbound on Friant Road, but was followed by witnesses and eventually blocked in until investigators arrived.

One person in one of the other vehicles involved was taken to the hospital with injuries. The DUI suspect, a 57-year-old man, was arrested on suspicion of felony DUI and hit-and-run.

Accident victims can go to the hospital with what they believe is a minor injury, only to find that their pain increases as the shock of a crash wears off. An injury can be much more serious than first thought, and victims can be left with thousands of dollars in ambulance fees and emergency room costs. The bills may keep stacking up as further check-ups or even surgeries are required in the months and weeks that follow.

A claim for damages can be filed against a DUI suspect’s insurance provider to recover the medical costs involved and the lost wages while the victim misses work. This is a civil claim and is separate from any criminal proceedings a suspect may face. A criminal trial can advance without affecting the victim’s opportunity to demand insurance support while he or she heals.

Maison Law of Fresno works to protect you and your family from insurance company tactics after an accident. Insurance adjusters won’t care if an injured victim ends up with some or all of the recovery costs. A personal injury lawyer on your side can fight to make sure you don’t face extreme losses in an accident you weren’t to blame for.

After an accident involving a serious injury, contact an experienced Fresno car accident lawyer such as Martin Gasparian for a free consultation and case evaluation. Mr. Gasparian believes that clients should work directly with their lawyers, get honest advice, and the personalized attention to detail their case deserves.