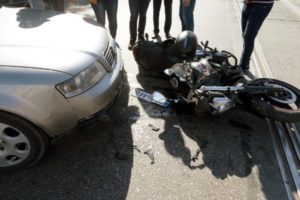 Motorcyclists in Fresno must keep an eye on every motorist because drivers can so often fail to keep an eye out for them.

One of the most common accident scenarios for riders is seeing someone in oncoming traffic turn left in front of them. The careless driver misses seeing the motorcycle for some reason or misjudges the distance and proceeds. The dangerous move puts the full length of the vehicle in front of the motorcyclist for several seconds, often leaving the rider without time or the room to avoid a dangerous impact.

A motorcyclist was rushed to the hospital after a crash in central Fresno on Sunday Afternoon. ABC30-TV reported the accident happened around 1 p.m. at the intersection of Effie Street and McKinley Avenue on March 21, 2021.

Fresno Police say a man on a motorcycle, in his 60’s, was traveling west on McKinley when a Honda Civic made a left turn in front of him. The resulting collision left the rider badly injured. He was taken to Community Regional Medical Center in critical condition.

The man, in his 20’s, driving the Honda stayed on the scene to cooperate with investigators. The cause of the accident hasn’t been released.

Drivers who put people on motorcycles in dangerous situations and end up causing serious injuries should stand by their victims through recovery. It sounds like an obvious act of taking responsibility but often victims and their families have to fight to get support after a terrible accident.

To make sure drivers and their insurance providers have no choice but to offer the help that’s only fair, victims or their family members are allowed to file a claim for damages. This help can be in the form of assistance paying for medical costs, not just now, but in the months and years to come. We believe motorcyclists aren’t fully healed until they are able to get back on their bikes again. Lost wages at the victim’s place of work should also be one of the first things covered by the driver’s insurance company representatives.

Insurance companies like to try to shift blame to motorcyclists for their accidents when they can. It’s important to have a lawyer of your own who has experience dealing with the common tactics insurance agents use to save their companies money. Having a legal representative can be the difference between getting all of your hospital bills covered or, sadly, only getting enough compensation to cover the first night at the emergency room.

After a serious motorcycle accident reach out to a Fresno Motorcycle Accident Lawyer such as Martin Gasparian for a free consultation and case evaluation. Mr. Gasparian takes a hands-on approach to every case. He believes that victims and their families should work directly with their lawyer, get honest advice, and the personalized attention to detail their case deserves.