The pandemic that stranded many of us in our homes in 2020 also forced us to hang up our car keys for a while. With vehicles stashed in garages and driveways, traffic levels in the busiest cities in America took a nosedive, and with that came the one positive of fewer roadway collisions. That meant fatality and injury rates were also at record low rates.

In California, more Golden State drivers put it in park and stayed home and the effect on some of the busiest freeways in the nation was impossible to miss.

California saw a somewhat miraculous downturn in gridlock making it much easier to keep travelers safe and alive in 2020. Patch found that accident rates across the state dropped by 75% from March 19 through April 30 of 2020 when compared to 2019.

When examining the weekly California accident figures, you can’t help but see that 2020 actually started down the wrong road when it came to collision numbers. There’s a noticeable spike in accidents in February 2020 when compared to 2019. Then in March, a worldwide pandemic made stay-at-home orders necessary. Things changed overnight. 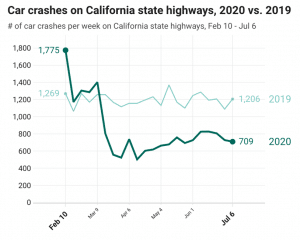 Millions of commuters didn’t need to show up for work anymore, or travel to birthday parties, or speed off to sporting events, and that led to empty freeways and streets everywhere you looked. In the span of a week, accidents on highways dropped to 2019 levels, and then in another week, they were cut in half when compared to the previous year.

The same trajectory can be seen for the number of miles California motorists logged each week. The figures show a dead heat when compared to 2019 distances. Then COVID-19 took its sudden toll and travel dropped by about a third for the better part of three months. As of July 2020, California traffic still hadn’t rebounded. 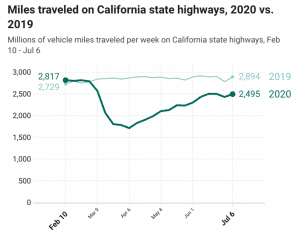 California Speeding Accidents During the Pandemic

Overall, police across the state complained that the motorists who did venture out for a drive weren’t watching their speedometers, but with fewer vehicles on the road, the rates of speeding-related accidents remained low regardless.

A look at the weeks leading up to the stay-at-home orders reveals that 2020 speeding accidents were surging over 2019 levels, but then the pandemic served to extinguish the problem. 2019’s average of 600 speeding accidents a week was more than cut in half through March, April and May of 2020. 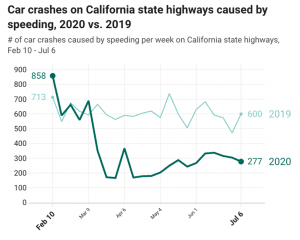 The news wasn’t all positive, unfortunately. Police officers weren’t exaggerating about the speeding outbreak on less crowded highways. Drivers with fewer cars in front of them seemed to find little reason to tap the brakes. The California Highway Patrol (CHP) saw an astounding 46% increase in the number of tickets for drivers going more than 100 miles per hour.

The numbers show that even though there were markedly fewer motorists, for those that did travel, the risks were greater, largely from the effect of speeding drivers.

The scary development was especially noticeable in Los Angeles, a city that in normal years sees a fatal accident every 36 hours. By May of 2020, traffic levels were still much lower than normal, but fatality rates were around the same levels as 2019. Fewer cars but more fatal outcomes.

Deputy Chief Blake Chow told the Los Angeles Times that speeding on city streets has been a major factor in increased numbers of fatal crashes. L.A. Police saw speeding on city streets increase by as much as 30% at times. In the first half of May, Los Angeles officers saw 21 victims in fatal accidents. That’s more than one fatal accident victim a day.

California DUI Accidents During the Pandemic

Another definite plus of people sheltering in place, fewer people making the terrible decision to drink and get behind the wheel. The chart below once again shows that early 2020 was getting off to a frightening start when it came to people drinking and driving.

Yet, once the pandemic took hold on the world, California DUI involved accidents dropped by as much as 40 to 50 incidents a week. 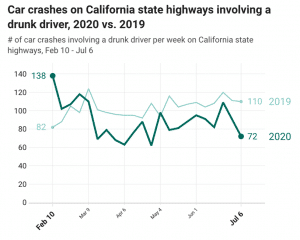 Patch looked at CHP accident numbers from March 19 through April 30 of 2020 and discovered DUI arrests decreased by nearly 42 percent when put up against 2019 numbers. The 2020 period accounted for 4,223 DUI Crashes. 2019 accounted for more than 7,200 collisions.

As you look over the graphic depictions of the first half of 2020, it’s hard not to notice that many traffic dangers were truly surging just before the COVID-19 crisis took hold. You could say the pandemic had one positive effect in that it took us off a crash course towards truly tragic accident levels.

As California commuter and tourist numbers slowly ramp up again it would be nice to think that we can add motorists back without returning dangerous road hazards to pre-pandemic numbers. In a year of extreme risk from all sides, it’s our hope that highway travel can continue to fall down the list of top worries for California residents.