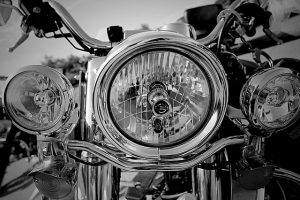 Motorcycles face dangers on any ride, whether in the city or along a road out in the country. Bikes can be several times smaller than the other vehicles on the road. The lower profile can make them almost invisible to distracted drivers who fail to check mirrors and blind spots properly before making a move. The crashes that result can be especially dangerous for riders.

The National Highway Traffic Safety Administration (NHTSA) finds that motorcyclists are 27% more likely to be killed in a crash than the drivers of cars.

The added risk for riders stems from several differences from being an occupant in cars.  Motorcyclists travel in the open air and don’t have the protection of a metal shell like someone in a car. Riders also aren’t held in their vehicles and are often sent from their bikes in a crash.  Riders only have their helmets and clothing to protect them and they are of little help in an impact with another vehicle or the ground.

A motorcyclist was killed in a collision in Kings County while trying to pass a truck Sunday afternoon KSEE-TV reported the accident happened outside of Hanford along Excelsior Avenue on August 30, 2020.

The California Highway Patrol says a Chevy truck had slowed down to make a left-hand turn onto 13th Avenue when a man on a Kawasaki motorcycle tried to pass on the left. The truck started turning left and struck the motorcycle.

The motorcyclist, a 36-year-old man, was pronounced dead at the Hanford Adventist Medical Center. Investigators don’t believe alcohol or drugs played a factor in the accident. The cause of the crash is still under investigation.

Help for the Families of Motorcycle Accident Victims

Tragic motorcycle accidents can be the fault of a careless driver who simply failed to notice a motorcycle nearby.  The inattention can lead to a car, SUV, or truck making a move a motorcyclist couldn’t see coming or prepare for.  The rider can be forced into a violent collision.

The family left behind will get the sad news and have to cope with the sudden loss of a loved one.  A spouse and children may have to face life without a husband or wife or mother or father. They may get little time to cope with the loss before the hospital and funeral bills stemming from the accident start to arrive in the mailbox.

In these tragedies, the family of the deceased is allowed to file a lawsuit to get help paying those bills and covering other financial damages that result from the loss of a family member. This can be done with something called a wrongful death claim.

A wrongful death claim can be filed by a representative acting for the entire family. This representative can be a spouse or domestic partner, or the deceased’s adult children, or even the victim’s parents. An attorney can also represent the family.

The claim is leveled against an at-fault driver and his or her insurance company.  If the claim is won, the close family can hope to recover money to pay any hospital bills built up before the death and funeral costs.  The support from a paycheck that the deceased can no longer provide to a spouse and children can also be recovered. This can include the future wages the deceased would have provided. The mental anguish for the family and the loss of emotional support the victim would have provided throughout the lives of his or her children can also factor into an award in a wrongful death case.

In California, a family is granted up to two years from the date the victim passed away to file a wrongful death claim. The Hanford attorneys with Maison Law do not recommend waiting years to file a claim.  The further from the date of the accident it gets the harder it will be to gather the details needed to build a strong case against at-fault drivers and their insurance companies.

After a motorcycle accident in the Central Valley, contact attorney Martin Gasparian for a free consultation and case evaluation. Mr. Gasparian takes a hands-on approach to every case. He believes that every client should work directly with their lawyer, get honest advice, and personalized attention to detail their case deserves.