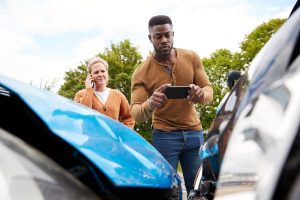 Injured by Driver with Suspended License in Merced?

Home » Injured by Driver with Suspended License in Merced?

What happens when the driver who hit you has a suspended license? In California, it’s a violation of the vehicle code to driver without a license, yet many people do every day. According to the American Automobile Association, unlicensed drivers account for almost 20 percent of motor vehicle fatalities every year.

This means in California, around 650 people die each year in accidents involving unlicensed drivers. When this happens, those injured are uncertain how this might affect their ability to get compensation for their injuries.

In nearby Los Banos on Tuesday, October 26, 2019, a pedestrian and a dog he was walking were injured when an unlicensed driver hit them. The accident happened around 4:20 p.m. in the area of Cabernet Street and Birchwood Avenue when a 35-year-old woman struck a 20-year-old man walking three dogs.

Witnesses say the vehicle struck the pedestrian and ran over one of the dogs when turned left onto Cabernet from Birchwood. The man was transported to Memorial Hospital and the injured dog was taken to a local veterinarian. Police say the woman driver was charged with being inattentive and driving on a suspended license.

Unless the at-fault driver has a fair amount of money, any injuries from an accident will be paid for by an insurance company. However, many times, a driver with a suspended license won’t have insurance because a valid driver’s license is required in California to register a car, and it’s very difficult to get a insurance on a car that is not registered or insured.

In some cases, a person’s license is suspended after they have registered their car and bought insurance. Then the driver is insured, but this might not last long when it comes time to renew insurance. Also, not divulging to the insurance company that your license is expired might give them reason to withhold paying for damages cause by your negligence.

What can be Done?

So, if you are hit by an unlicensed driver, what can be done? In some cases, it may be that there is no money for compensation, however, before the victim just accepts that, he or she should talk to an attorney to see if there are any sources of compensation.

It may be that the victim’s own auto insurance can be used. If the victim has uninsured/underinsured motorist coverage, then the policy will likely pay for their injuries. This is because with UM/UIM, it will pay for the victim’s injuries and financial losses so long as they were hurt in an auto accident and regardless if the driver has a valid license.

After any accident involving a serious injury in Merced, contact Merced Accident attorney Martin Gasparian for a free consultation and case evaluation. Mr. Gasparian takes a hands-on approach to every case. He believes that every client should work directly with their lawyer, get honest advice and the personalized attention to detail their case deserves.