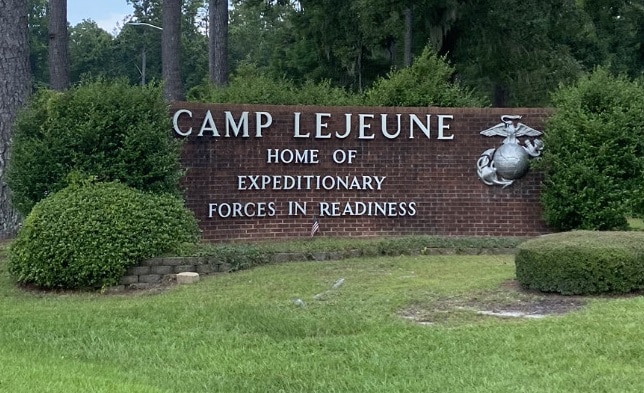 For 30 years and possibly even longer, nearly a million or more military personnel, their families, federal employees and other workers encountered toxic water at the Marine Corps’ Camp Lejeune in North Carolina. After continued exposure to this toxic polluted water, a statistically significant number of those people developed a wide variety of cancers and serious physical illnesses.

There’s strong evidence that deaths have been attributable to the cancers and illnesses too. Now, after overwhelming approval by the both houses of Congress, the Camp Lejeune Justice Act (CLJA) is a signature away from being signed into law by President Joe Biden. This may happen in the immediate future.

It appears as if former members of the military, their families and others who consumed or were otherwise exposed to toxic water at Camp Lejeune are likely going to have their day in court. They’ll be eligible to pursue compensation for the injuries and damages allegedly as a result of the U.S. government.

Maison Law now has made itself available to represent California’s victims of cancer and other serious illnesses along with those who have lost a family member as a result of the dangerously contaminated water at Camp Lejeune in North Carolina. If you or a family member were at Camp Lejeune for an aggregate of at least 30 days between August 1, 1953 and December 31, 1987, you may be eligible for compensation. That 30-day requirement doesn’t have to be continuous either.

In 2016, alleged victims of water contamination at the Marine Corps base camp began filing their lawsuits against the U.S. government. These cases were consolidated into multidistrict litigation in North Carolina federal court, but they were subsequently dismissed based on North Carolina’s 10-year statute of repose. Although legally correct, this ruling was grossly unfair as the statute of repose had already run before contaminated water at Camp Lejune was determined to have been the cause of the plaintiffs’ illnesses.

That’s when members of Congress realized that the plaintiffs who were dismissed out and others who didn’t even realize that the subject contaminated water may have been the cause of their cancer and illnesses needed some form of legal relief. With strong congressional support, the House of Representatives and Senate approved the bill.

With President Biden’s signature, former military members, their families and others will be able to file their lawsuits against the U.S. government. They failed to warn or protect them from the severe harm of drinking, bathing in, or otherwise using the dangerously contaminated Fort Lejeune water supply. As a result, people risked developing cancers, neurobehavioral effects, and illnesses like the following:

Some of the above conditions have even been considered presumptive by the U.S. Department of Veterans Affairs. Scientific and medical evidence already exists for a connection between certain conditions and contaminated Camp Lejeune water and the development of those conditions. Those presumptions will likely be permitted to be used in CLJA cases. Presumptive conditions presently include the following:

Miscarriages and stillbirths are also associated with Camp Lejeune’s drinking water. There were more than 100 cases of birth defects attributable to Camp Lejeune water. The U.S. Centers for Disease Control and Prevention was able to confirm 15 cases of spina bifida and anencephaly, 24 oral clefts and 13 cancers.

It concluded that women who drank the tap water at Camp Lejeune were four times more likely to have children with birth defects than women in similar circumstance that didn’t drink it. More than 80 men who spent time at Camp Lejeune developed a rare form of breast cancer.

What Caused the Water to Be Unfit for Consumption or Use?

According to the National Institute of Health, at least two wells and water systems are believed to have been the causes of the contamination of Camp Lejeune water.

Both the Tarawa Terrace system and the Hadnot Point system served enlisted family housing, barracks for unmarried military personnel, base administrative offices, schools, and recreational facilities. In addition, the Hadnot Point system also served the base hospital, an industrial area that supplied water to another residential area.

You can absorb the dangerous chemicals orally, by breathing them, or through contact with the skin. The following four manmade industrial chemicals which are common groundwater contaminants were present in the water from these two sources:

Who Might Bring a Claim Under the Camp Lejeune Justice Act?

Generally, anybody who resided at Camp Lejeune for 30 days or more can bring a claim under the CLJA. Again, residence need not be continuous.

Claimants might include former Marine Corps and other military personnel, their family members who resided with them and civilian employees. This includes Reserve and National Guard members.

Even individuals who whose mothers were pregnant and carrying them while their mother was living on the base might be eligible.

The Government Knew About the Contaminated Water:

Nearly all of the contamination at the base came either from chemicals from a nearby dry cleaner, a leaky underground storage tank, or industrial spills. Critical to any claims or lawsuits brought against the federal government is the fact that it either knew or should have known of the water contamination at Camp Lejeune and failed to do anything about it.

The government also failed to warn military personnel, their families and others of the possible health issues that they might have to confront. There are strong indications that the military knew of hazardous chemicals being in the base water supply since before the 1950s but failed to do anything about them. Assuming they enact the CLJA, this would be the primary point for liability against the government.

The injuries and damages from Camp Lejeune water are likely to be permanent. For some, they were fatal. In the law of personal injury, damages can be economic or non-economic. Economic damages are less complicated to measure as each item of them has a specific price tag on them.

The more quality evidence that a claimant submits in support of their claim, the higher the likelihood becomes that his or her case will be successful. This evidence can may include the following:

What California’s Victims or Family Members Need to Prove:

The CLJA has set a unique burden of proof for litigants. The party bringing the action must produce evidence showing that the relationship that exposure to water at Camp Lejeune and the harm is:

The use of studies in support of CLJA cases is permissible. They must provide sufficient evidence that exposure to the water described is one possible cause of the harm.

It “shall be sufficient to satisfy the burden of proof . . .” Nobody knows how they will interpret this provision until after they enact the CJJA and hear cases, but it appears to eliminate the need for expert witness testimony.

The Prerequisite of Filing A Claim:

Take notice that the proposed legislation provides that before a CLJA lawsuit can be filed, a claim for the injuries alleged must be brought pursuant to 28 USC section 2675. Federal agencies then have 6 months to approve or deny a claim. In nearly all cases, the appropriate agency will be the Department of Defense. We recommend that you contact an attorney prior to filing a claim.

The Statute of Limitations:

Thousands of victims of severely contaminated water live at Camp Lejeune or in nearby Jacksonville, NC. However, many now live here in California in Los Angeles, Fresno, San Diego or other areas around California. Others are across the world. Tragically, others have died from conditions caused by the toxic water at the base. The window for filing a CLJA claim begins closing as soon as President Biden signs off on the Act.

If you or a family member falls within the qualifying criteria for bringing a CLJA action, contact us at Maison Law for a free consultation and case review.

We’ll be accepting new cases from individuals and families who used dangerous Camp Lejeune water. You’re going to be in need of an aggressive CLJA lawyer. If you or a family member were an affected person, contact our offices as soon as you can.

If you or a loved one sustained injuries from water contamination in Camp Lejeune, you might be eligible for compensation.

Contact attorney Martin Gasparian for a free, no-obligation case consultation for you and/or your family.