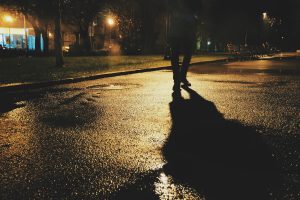 Pedestrians traveling Fresno at night must be extremely careful because many drivers won’t be taking the proper time to look out for them. When the sun goes down it’s important that every driver only increase the level of attention paid to the road. Sadly, at night, drivers often pay even less attention.

A careless driver can hit someone on foot and cause a devastating injury. Drivers make the situation much worse when they make the terrible decision to speed away from the scene in order to avoid accountability for what they’ve done.

A woman was badly hurt after getting hit by a car Monday night in western Fresno. KSEE-TV reported the accident happened near the intersection of Olive Avenue and Lafayette Avenue on November 22, 2021.

Fresno Police were called to the area shortly before 8 p.m. They say a woman was struck while walking on Olive Avenue. The victim was rushed to a local hospital with major injuries. Information on her identity and current condition has not been released.

Investigators say the driver responsible for the accident drove away from the scene and remains unidentified. Anyone with information about the driver or vehicle involved in this hit-and-run accident is asked to call the Fresno Police Department.

A pedestrian struck by a hit-and-run driver can wait precious extra minutes for someone else to spot them and call 911 for help. That elapsed time can lead to victims suffering even worse injuries and potentially even endangering their lives.

Victims and their families may seek financial support through recovery even when a hit-and-run suspect remains unidentified. Victims may have to file a claim for damages against their own car insurance policy. This claim calls upon the uninsured motorist portion of the policy. If victims don’t have this auto insurance, it’s possible they are covered on another family member’s policy.

Support can be earned to pay for all medical expenses and replace the paychecks the victim has lost while out of work.

Support can also be gained from the hit-and-run suspect’s insurance policy if the driver is apprehended. The driver will be facing criminal charges, but that doesn’t prevent a victim or family member from filing a civil claim. The civil case for the victim can proceed no matter where the criminal matter stands.

A Fresno Lawyer Serving Pedestrian Accident Victims and Their Families

Insurance companies can try to change the narrative of what happened and blame a pedestrian for their own accident. They may use this tactic to deny financial support to the victim. At Maison Law, we don’t stand for this “bad faith” behavior that targets victims.

Drivers can be held liable for the pain and suffering they cause, even when a pedestrian wasn’t in a crosswalk when he or she was hit.

After a pedestrian accident involving a serious injury or the loss of a loved one, contact attorney Martin Gasparian, the founder of Maison Law, to discuss your options. No matter whose insurance company you’ll be seeking help from, you’ll want an experienced personal injury lawyer making sure you and your family aren’t taken advantage of during such a difficult time.