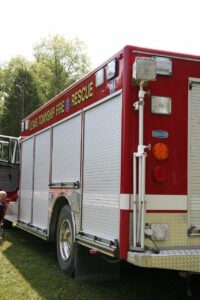 Wildfires and other natural hazards in California can reroute traffic and send a lot of extra vehicles onto two-lane highways not designed for such congestion. Drivers can become distracted or reckless as traffic levels increase and end up causing a dangerous collision.

Emergency response to any injured victims can also be hampered by back-ups on narrow highways. Extra care should be taken by all motorists who travel on a detour route during wildfire season in Southern California. Traveling at speeds safe for conditions can mean motorists travel well under the posted speed limit, but this cautious approach can prevent accidents and save lives.

Emergency responders rushed to the scene of a two-vehicle collision Wednesday morning in Santa Barbara County near Cachuma Lake. KEYT-TV reports the accident occurred along Highway 154 at Cachuma Village Road on October 13, 2021.

The California Highway Patrol indicated the collision involved a semi-truck rear-ending a minivan. There’s been no word on if anyone suffered injuries in the accident.

The accident caused major delays and took place during an already congested period on Highway 154. The area is seeing major backups due to the Alisal Fire that’s already shut down Highway 101 and sent extra traffic around on Highway 154.

Traffic can get busy on alternate routes around regions experiencing wildfires. Inattentive drivers can take their eyes off the road and fail to see stopped traffic. They can also allow their vehicles to veer out of a lane into the path of other cars. Once an accident occurs and someone has been injured, victims can seek financial support from an at-fault driver’s car insurance provider. In the case of a collision caused by a professional truck driver, a company employing that driver may also be accountable for assisting a victim through recovery.

A claim for damages seeks to earn victims money to pay for all emergency room, hospital, and rehabilitation bills. This civil claim also asks for reimbursement for any paychecks an injured victim has missed at work while in recovery.

Accident victims can require the help of an experienced legal expert to make sure they are treated fairly and receive fair compensation for what they’ve been through. Don’t trust an insurance company to inform you of your rights as a victim and the benefits available to you and your family.

After an accident involving a serious injury, contact a skilled Santa Barbara County Car Accident Lawyer such as Martin Gasparian for a free case consultation. Mr. Gasparian takes a hands-on approach to every case. He believes that accident victims and their families should work directly with their lawyers in order to protect their interests when forced to rely on an insurance company for support.