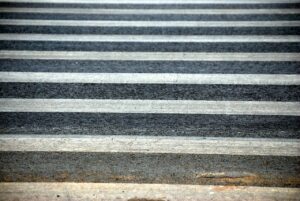 Pedestrians in some parts of Bakersfield are often asked to give up basic safety assurances just to travel a few blocks. Some crosswalks can be marked with lines nearly faded-off and give those on foot a matter of seconds to get across up to eight lanes of traffic.

These hurried trips can occur after dark when drivers should be paying extra attention to crosswalks and looking out for pedestrians. Instead, many motorists can let their minds wander at night and show even less attention to the lanes in front of them.

What’s more, drivers can accidentally strike someone on foot and make a tragic moment even worse by driving away from a scene to attempt to escape blame for their mistake.

A woman lost her life Tuesday night after getting struck by an SUV in a hit-and-run accident. KGET-TV reports the collision took place just after 10:30 p.m. at the intersection of Stine Road and Ming Avenue on September 7, 2021.

The Bakersfield Police Department says the adult female victim was found with major injuries and was rushed to the hospital. She later passed away from her injuries.

Investigators say the driver of the SUV responsible for the accident fled the scene on Ming Avenue. The vehicle is described as a red or orange 2020 Toyota C-HR SUV. If anyone has information about the driver or vehicle involved they are asked to call the Bakersfield Police Department.

Support for Families After A Bakersfield Pedestrian Accident

A hit-and-run pedestrian tragedy will leave family members to cope with their grief and wondering how justice can be obtained when an at-fault driver left the scene of an accident.

In cases where a hit-and-run suspect is eventually located, families can immediately move forward with a wrongful death claim filed against the car insurance company representing the at-fault driver. The suspect may be facing a criminal trial, but the family’s civil wrongful death lawsuit will proceed separately.

This lawsuit can assist close relatives in paying for funeral expenses, medical bills built up at the hospital, and help in the future when the family is no longer able to rely on the care and financial help the victim had always provided.

After an accident claims the life of a loved one, contact an experienced Bakersfield Wrongful Death Attorney such as Martin Gasparian. He offers a free and confidential consultation for you and your family.

Mr. Gasparian works to protect families after a tragic accident. He wants to make sure they are informed of their rights as victims. Martin Gasparian also strives to see that families receive everything needed to help ease their hardships now and in the years to come.