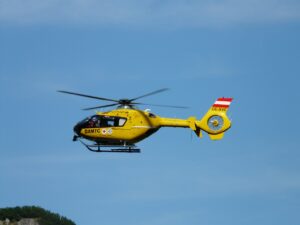 Motorcyclists in Santa Barbara County enjoy a variety of landscapes to ride along. However, no matter where they travel, they’ll find drivers making the same types of mistakes.

Drivers can become distracted by a text message or a conversation in the car and miss spotting the smaller profile of a motorcycle alongside them or coming directly at them.

This can be especially hazardous in turning situations when drivers may look both directions and think the coast is clear for them to complete a turn. When they’ve missed a motorcyclist, their cars can suddenly be a large obstacle in front of the approaching rider, allowing for no time to avoid a collision.

Two people on a motorcycle were badly hurt after a collision with a car on Sunday afternoon in Santa Barbara County. KSBY-TV reports the accident occurred sometime before 5:20 p.m. along Highway 246 in the Santa Ynez Valley, west of Highway 154 on September 19, 2021.

Officials on the scene said that a male motorcyclist and a female passenger suffered serious injuries. One was transported by ambulance to Santa Barbara Cottage Hospital. One victim was flown to the hospital. Their identities have not been released.

The driver of the car was not hurt in the crash. The circumstances surrounding the accident are still under investigation.

Motorcycle accident victims must overcome many obstacles to recover from injury and get back on their bikes again. Unfortunately, they must protect their financial health by making sure they don’t start paying out-of-pocket for medical costs from an accident that wasn’t their fault.

Victims or their family members can file a claim for damages against an at-fault driver’s car insurance provider. This claim can ask for support to pay every medical bill now and those expected in the future. The lost time at work a victim takes a financial hit for should also be reimbursed in full.

Insurance companies make it a point to try to blame motorcyclists for their own accidents even when the evidence points in a different direction. Victims and their families can require an experienced legal expert to make sure they are treated fairly and receive fair compensation for what they’ve been through.

After a motorcycle accident involving a serious injury, contact a skilled Santa Barbara County Motorcycle Accident Lawyer such as Martin Gasparian for a free consultation. Mr. Gasparian takes a hands-on approach to every case. He believes that motorcycle accident victims and their families should work directly with their lawyers to protect their interests when going up against an insurance company.