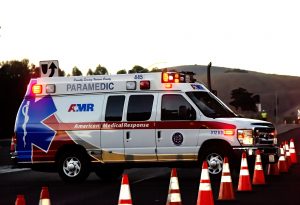 Busy thoroughfares through Santa Maria can get busy and carry more traffic than they were designed for. Drivers traveling alongside other vehicles can make a small mistake that has major consequences for the many other motorists nearby.

Collisions can leave victims with serious injuries and in the worst cases claim precious lives. The consequences of these accidents can be especially devastating when impacts carry enough force to send a vehicle over on its side or top.

Rollover accidents present unique dangers to drivers and passengers because victims can suffer blows from the car seats, car dashes, car doors, and even the roof. Consumer Reports found that about 3% of all serious crashes in the nation involve a rollover and yet they account for about 30% of all traffic fatalities each year. Anytime a vehicle has less than four wheels on the ground the people inside are placed at extreme risk.

Santa Maria Police said the accident involved three vehicles and noted the impacts sent one of the vehicles rolling over. Several victims were injured and two ambulances responded to the scene. Their conditions have not been released.

The Santa Maria Police Department continues its investigation into the cause of the crash.

Finding Assistance for Victims After Accidents in Santa Maria

Victims in accidents can suffer severe injuries and require an ambulance ride or a helicopter flight to a local emergency room or trauma center. There’s also the chance that victims won’t feel much pain after a crash and not know they have, in fact, been injured.

Sometimes the shock and adrenaline experienced after an impact can mask the symptoms of an injury for several hours or even days.

Victims who feel they’ve suffered only minor cuts and scrapes in an accident should really monitor themselves and be under observation by family members for several days after their incident. A trip to the victim’s own physician for a thorough check-up is a good idea in the days that follow.

No matter when an injury emerges, victims should never have to pay the high costs of medical care after an accident they weren’t to blame for. A claim for damages can be filed to make sure these costs don’t fall to the victim.

This claim is directed at the car insurance agency representing the at-fault driver. It requests support for every hardship the victim has endured such as medical expenses and lost wages while missing work. This claim can also seek to cover any further medical treatment and physical therapy needed in the months to come.

After an accident involving a serious injury, contact an experienced Santa Maria car accident lawyer such as Martin Gasparian for a free, no-obligation consultation. Mr. Gasparian takes a hands-on approach to every case. He believes that every client should work directly with their lawyer and get honest advice and the personalized attention to detail their case deserves.