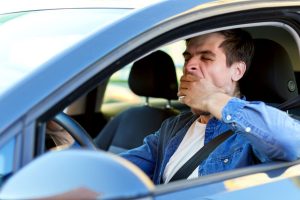 Highway 99 through Central Valley is known as one of the most dangerous stretches of roadway in the country. Distracted and speeding drivers can make a trip treacherous for others on the road, and factoring in drowsy drivers can make the going even more hazardous.

Motorists who get behind the wheel while fatigued or sleepy put more than just themselves at risk. The California Office of Traffic Safety (OTS) warns that drowsy driving causes fatal accidents every year in every state. In a single year, 795 people tragically lost their lives in drowsy-driving related crashes across the nation.

What’s more, young drivers were the most at risk for falling asleep behind the wheel. Statistics revealed that around half of all accidents caused by a sleepy driver involved someone under 25-years-old.

A collision between an SUV and a pickup truck pulling a livestock trailer sent one driver to the hospital in Turlock Monday morning. The Modesto Bee reported the accident took place just after 9:30 a.m. along Highway 99 south of West Monte Vista Avenue on March 22, 2021.

The California Highway Patrol (CHP) believes the driver of a Chevrolet SUV in the northbound lanes made an unsafe turning movement and struck the rear of a trailer being pulled by a Chevrolet Silverado pickup. The truck overturned several times and came to rest upside down.

The driver of the Silverado, a 41-year-old man from Chowchilla, was transported to Memorial Medical Center with moderate injuries. Livestock that had been in the trailer had to be rounded up and put in a replacement trailer.

The driver of the SUV, a 20-year-old man from Ceres, was uninjured. The CHP said DUI was not suspected. They say that the investigation does point to drowsy driving as a possible factor.

A little over an hour later there was another accident involving livestock reported on Keyes and Pioneer Roads north of Turlock. The California Highway Patrol said a loose trailer gate allowed cows to escape. One vehicle struck a cow in that accident. There were no injuries reported for the occupants of the vehicle.

Drivers who lose focus on the road can be hard to spot until it’s too late to avoid an impact. Safe drivers can end up forced into devastating collisions and suffer severe injuries. Victims who are hurt in an accident can be stabilized in the hospital and then have time to consider how medical expenses, rent, and car payments will get paid.

The fact is victims should never have to worry about these costs while trying to heal and rehabilitate, especially after an accident that wasn’t their fault. For this reason, victims are allowed to file a claim for damages against an at-fault driver’s insurance policy. This claim can make sure victims get help with hospital bills, ambulance fees, and lost wages from missing work.

Insurance companies like to try to avoid paying victims what’s fair by questioning the circumstances of an accident and trying to blame the victims. Having an attorney representing your case can make sure they can’t escape blame in this way. Your attorney can gather evidence and testimony to ensure your accident case is strong and leaves no room for an insurance agent to deny compensation.

After an accident involving a serious injury, contact an experienced Turlock car accident lawyer such as Martin Gasparian for a free consultation and case evaluation. Mr. Gasparian takes a hands-on approach to every case. He believes that every client should work directly with their lawyer, get honest advice, and personalized attention to detail their case deserves.