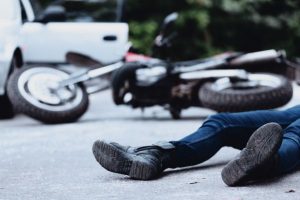 Accidents Caused by Drivers Pulling Out in Front of Motorcycles in Turlock, CA

Home » Accidents Caused by Drivers Pulling Out in Front of Motorcycles in Turlock, CA

In the event of an accident, other than maybe a helmet, most motorcycle riders are exposed with no real protection against injury. Even with their lights on, motorcycles present low and slim profiles in traffic. Some drivers just don’t see them, or they don’t see them until it’s too late.

Cars Turning in Front of Motorcycles

A recent Turlock motorcycle crash occurred when a car turned in front of a motorcycle at Whitmore Avenue and Baldwin Road at about 6:25 p.m. A 21-year-old motorcyclist was eastbound on Whitmore when the driver of a passenger car turned into his path while attempting to turn his car northbound on Baldwin. Upon hitting the car, the motorcyclist flew through the air and landed on the roadway. He was pronounced dead at the scene.

The same rules of the road apply in accidents involving passenger cars or other vehicles and motorcycles, especially in left-turn accidents. The driver of a vehicle that causes an accident while turning left is likely to be primarily liable for the crash. A motorcyclist can be held to be partially at fault for his or her own injuries though. For example, a motorcyclist might be determined to have been accelerating into an intersection immediately before a left-turn accident. That’s when California’s comparative negligence laws might need to be considered.

In many accidents, there is a question of whether the person who is claiming injury and damages was partially at fault. When allegations are made to that effect, a jury might be called upon to determine the relative fault of the parties and assign a percentage of negligence to each of them. That’s what’s known as the law of comparative negligence. For example, in an intersection collision, if a car turns left in front of a speeding motorcyclist, the biker might be held to be 20% at fault for the accident. An award of $100,000 will be reduced to $80,000 on the percentage of fault attributed to the claimant. California is what’s know.n as a pure comparative negligence state. A claimant can be determined to be more than 51% at fault for an accident, and he or she can still be awarded partial compensation for their damages.

If you were injured in a motorcycle crash, or you lost a family member in one, don’t give the opposing insurer any type of a statement. It will only try to use the contents of your statement against you in the future. Rather than jeopardizing any case that you might have, talk to us first. You can contact us to arrange for a free consultation and case review. Anything that you say to us is protected and confidential. You can tell us what happened and how it has affected you, and we can answer your questions and advise you of your legal options. Contact our Turlock Motorcycle Accident Lawyers right away after being injured or losing a family member in any motorcycle accident.