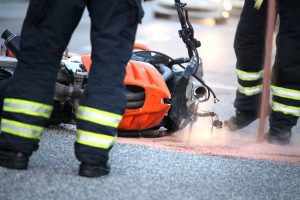 Motorcyclists can control their own machines and make sure they are riding safely, but they can’t always avoid dangerous drivers who are distracted or just careless. Distracted drivers cause accidents for riders every day due to their inattention, especially as they change lanes and attempt to make turns.

A motorist can be ready to make a turn, check for other cars coming, but for some reason not see motorcyclists who may be approaching. The driver makes a turn in front of the motorcycle and leaves the rider to make a dangerous swerve out of the way or endure a collision.

It’s a mistake that leads to thousands of riders getting hit every year.

A man on a motorcycle was struck by a car and killed near Hughson on Saturday evening. The Ceres Courier reported the accident happened in Stanislaus County on Whitmore Avenue at Baldwin Road around 6:25 p.m. on October 31, 2020.

Investigators say the 21-year-old rider was traveling eastbound on Whitmore when a 67-year-old man driving a Toyota turned into his path. The motorcyclist struck the car’s right rear on the driver’s side and was thrown from his bike. He was declared dead at the scene.

The driver of the Toyota, from Turlock, was not hurt. Investigators found that he was at fault for the accident.

Support for Stanislaus County Families after an Accident

A tragedy on a motorcycle ride will devastate a community and the family left behind. A grieving family may wonder how the accident could have been prevented and if justice can be found for the lost loved one.

Nothing can bring back the victim after a terrible accident, but the family that remains can seek to secure their future now that a beloved member has been taken from them. Filing a wrongful death claim against the driver at-fault can help make sure the family doesn’t face a financial disaster as the bills from the accident begin to arrive.

This civil lawsuit can be filed by a close family member like a spouse, child, or the parents of the victim. The claim would seek compensation from the driver’s insurance company. An award can provide money to the family to pay for ambulance and hospital bills and cover the cost of a funeral. Compensation can also cover the lost earnings from a job the deceased would have supported the family with. The loss of the emotional support the victim would have provided the family in the coming years can also be factored into an award.

If you or a loved one was the victim of a motorcycle accident caused by a careless driver in Stanislaus County, contact attorney Martin Gasparian for a free consultation and case evaluation. Mr. Gasparian takes a hands-on approach to every case. He believes that every client should work directly with their lawyer, get honest advice, and personalized attention to detail their case deserves.