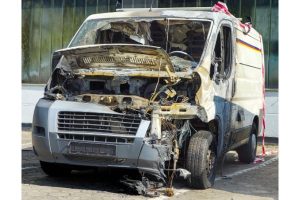 Suddenly coming upon stopped traffic on the highway can force you to slow down quickly with little warning.  It’s a relief to get your vehicle stopped in time, but then you must worry about the drivers behind you.  Will they notice the brake lights and stop in time to avoid hitting you?

It’s a common risk on fast-moving freeways when drivers aren’t paying attention. Distracted drivers can glance down and miss a traffic obstacle up ahead. By the time they look back up, they’ve lost vital reaction time.  They can end up causing a devastating collision with one or more cars who happen to be in front of them.  The results of that inattention can be a serious accident endangering everyone involved.

One person is dead and another person is injured after their car was struck from behind and sent rolling down an embankment in Hanford, Saturday Afternoon. KSEE-TV reported the accident happened on Highway 198 near Hanford Armona Road on September 19, 2020.

The California Highway Patrol says the collision happened as traffic was slowing down and backing up from another car accident. In the backed-up traffic, A Frito Lay truck going an estimated 60mph hit a Toyota Prius from behind. The Prius, with a couple in their 80s inside, tumbled down a nearby embankment.

The female passenger was pronounced dead on the scene. The male driver was taken to the hospital in critical condition. The driver of the Frito Lay truck was not injured. Investigators have not released their determination on what caused the accident.

Finding Justice After A Deadly Accident

A traffic accident will devastate the family that’s left behind. Loved ones can be lost or severely injured and the relatives that care dearly for them may also face the costs that arise in the aftermath. Family members may see hospital bills and funeral costs, all without the financial and emotional support they’d come to depend on from the victim.

In the case of an accident that claims a life, the close family may have to file a wrongful death claim to get help with many of the hardships they’ll face. This civil lawsuit is directed at the at-fault driver and his or her insurance company. If the person who caused the accident is a delivery driver then the company they work for could be forced to accept liability as well.

A spouse, any adult children, or another close relative can file a wrongful death claim on behalf of the family. An attorney can also bring the case forward for the family. This claim can recover financial costs and even compensate family members for the emotional support that was lost when the victim passed away.

If the victim survives the crash but is injured then a claim for damages can also be filed. This claim can require the at-fault driver and his or her insurance company to cover many hardships like medical bills, lost time from work, and even travel costs associated with recovery.

If you’ve been injured in an accident or a loved one has been injured or lost in an accident contact an experienced Hanford car accident lawyer such as Martin Gasparian for a free consultation and case evaluation. Mr. Gasparian takes a hands-on approach to every case. He believes that every client should work directly with their lawyer, get honest advice, and personalized attention to detail their case deserves.