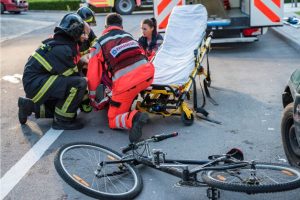 Like pedestrians, it seems cyclists are under siege from motorists. Overall, accident fatalities have been coming down over the last few decades, however, both pedestrian and cyclist deaths have soared. One of the reasons for the increase in cyclist deaths is that while there is an increase in the popularity of cycling and this is putting more bikes on the streets. Unfortunately, there hasn’t been a similar increase in awareness of cyclists from motor vehicle drivers.

Madera Police responded to two cyclists injured by a motor vehicle on N. Friant Road just south of Millerton Lake around 6:20 Tuesday, June 9, 2020. A pair of cyclists were on the ground after being hit by a Honda Civic that had lost control and went off the road.

Police say that right before the accident, it appeared that the Civic was traveling at a high rate of speed. Both cyclists suffered major injuries and were listed in critical condition after being taken to a local hospital. The Madera Police Department issued a statement to motorists to share the road with cyclists.

The higher the speed of the impact, the more dangerous a collision is between a motor vehicle and a cyclist. A study by Irene Isaksson-Hellman and Josefin Toreki showed that when the speed limit is reduced from 35 mph to 25 mph, injuries went down 25%.

The reason for this is that the slower the car travels, the more time the driver has to see cyclists and to react quickly to avoid a collision. Then when one happens, the higher the impact, the more force is exerted on the bicyclist which results in significantly more serious injuries.

When a driver is speeding, the risk of an accident and a serious injury goes up significantly. At Maison Law, we know how dangerous the country roads and be to cyclists, and we fight hard to make sure that cyclist is going to be fairly compensated.

An injury can sideline someone for a long time, and depending on the severity, the injury can be with the person their whole life. We’ve represented victims of cyclist crashes who’ve suffered all types of injuries, and each one needs to be handled differently.

Some of the more common injuries we’ve seen where a cyclist is struck by a speeding car are: