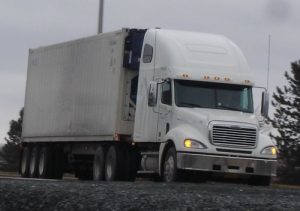 Big Rigs run through the Central Valley on the country roads that connect towns like Merced to the rest of the valley. They carry goods, building materials, supplies and just about anything needed for the bustling economy of the region.

While this is great for business and the economy, big rigs can be dangerous to pedestrians out using the same roads.

Pedestrian Struck and Killed by Big Rig in Merced

A big rig was driving on southbound State Highway Route 59 near Vasser when he struck a pedestrian. It was dark out at the time, and the driver claims he tried to swerve to avoid hitting the pedestrian, but it was too late.

According to police at the scene, the truck driver pulled over, called the police, and cooperated fully. It appeared that the pedestrian died at the scene, and the driver wasn’t injured. So far, no charges have been filed, and the incident is still under investigation.

By definition a big rig is big. It can weigh up to 80,000 lbs fully loaded, and if a pedestrian is struck by one, there’s a high likelihood that the pedestrian will die or be seriously injured.

According to a report from the Insurance Institute for Highway Safety, there are around 5,000 people killed each year by semi-trucks. Out of those, 14 percent or, 700 people, were pedestrians. Freeways and multi-land highway pose the greatest risks for pedestrians followed by rural country roads.

When a person survives a hit from a big rig, the force of the impact usually causes serious injuries. The victim is typically thrown to the ground violently and has no protection against the impact. At Maison Law, we’ve seen the damage that a big rig can do to a person, and we’ve helped many victims get the compensation they deserve.

Over the years, we’ve noticed some common injuries that come about with a big rig, pedestrian accident, some of the most common are:

If you’ve been hit by a big rig or have lost a loved one from an accident with a big rig, you owe it to yourself to speak to an attorney right away. Many times victims or their families don’t want to think about the financial aspect of an accident, or they don’t want to appear too greedy or let anyone think that money is more important than their injuries or the loss of a loved one.

At Maison Law, we understand these feelings, and we would love to talk to you about what to expect dealing with your claim for compensation. Sooner or later, the financial magnitude of the accident will present itself, and you can find yourself overwhelmed by all the needs that come up.

The insurance company will tell you that everything will be ok, and that they will take care of things. However, they have one job to do, and that is to pay you as little money as possible. We won’t let that happen, and we will stand with you through your ordeal until you get back on your feet financially.