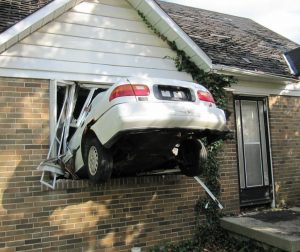 Who Pays When a Car Hits a House?

Home » Who Pays When a Car Hits a House?

No one thinks of getting into a car accident while sitting on their couch, however, this becomes a reality for many people when cars leave the road and hit buildings. Each year, around 20,000 cars hit buildings killing around 500.

Many times, the building offers some protection for the occupants, and the injuries are bruises and emotional trauma. However, other times, the injuries can be significant and even lead to death.

Police arrested a man for crashing his Kia Optima into a home Sunday while the occupants were watching the NFC Championship Football Game. The driver was allegedly impaired as his car left the road passing between two trees and crashing into the home on Georgetown Driver

The crash happened around 4:30, and the driver was charged with DUI, vehicular manslaughter and vehicular assault.

When someone is killed or injured in their home from an automobile collision, the issue of compensation will eventually come into focus. Auto insurance is designed for any liability a driver gets into an accident with another vehicle. Then the law requires that the negligent driver pay the victims for their injuries and financial losses.

However, when the victim is in the home, then certain questions arise. For example, does the insurance cover building collisions? What if the driver was impaired?

Fortunately for the victims, insurance will cover any losses that come from someone negligently driving their vehicle and causing an accident—even if the car crashes into a building. This also includes cases where the driver is impaired.

By law, insurance can’t cover intentional criminal acts such as when someone steals a car, but when the driver is impaired, the law still requires the at-fault driver’s insurance to cover losses.