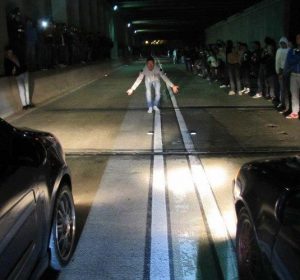 California has a street racing problem which is no surprise given popular movies like the Fast and Furious franchise films. California has more racing deaths than any other state and is third in written citations handed out for racing. Not all street racing occurs in big cities like Los Angeles, it is also a small-towns like Tulare. This is often because of the long stretches of roads with no stoplights and a lower likelihood of running into law enforcement.

The driver of a car is dead and his passenger and the driver of another car were hospitalized following a two-car crash Wednesday, January 29, 2020, around 2:30 p.m. The Tulare Police Department says that the 29-year-old driver of one of the cars was driving recklessly and at a high rate of speed. The car was also outfitted with illegal racing equipment.

The wreck happened at the intersection of Tulare Ave and Morrison Street. The driver of the speeding car was partially ejected and died at the scene, and the passenger in the car was injured along with the driver of the other car. Both were transported to local hospitals.

Racing is not only dangerous to those engaged in high speeds, but it also puts others at risk of death and serious injury. According to the National Highway Traffic Safety Administration, out of the 5,000 deaths attributed to street racing over the past 20 years, the majority of the deaths were not the driver of the racing car. Most of the deaths were passengers in the racing car or innocent bystanders.

Some people injured in street racing wonder if they are going to be compensated because of the illegal activity of the driver, or that they might have been involved in the street racing. In a typical accident, the insurance company for the driver who was at fault for all the damages, injuries and other financial losses that came from the wreck.

This means that if the racing driver has insurance, it will cover those costs so long as the driver was negligent in the crash. If someone who was participating in the race such as an organizer, passenger or lookout, the law allows the court to assign to them a percentage of the negligence which will reduce the amount of compensation they will get for their injuries.

After an accident involving a serious injury in Tulare or anywhere in the Central Valley, contact attorney Martin Gasparian for a free consultation and case evaluation. Mr. Gasparian takes a hands-on approach to every case. He believes that every client should work directly with their lawyer, get honest advice and personalized attention to detail their case deserves.