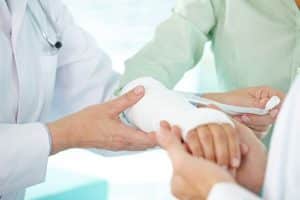 Many car accident victims fracture bones in their arms, legs, hands, and collarbone. Bone fractures are not life-threatening, but they are still serious injuries. The severity of the injury will depend on several factors, including the type of fracture. An impaction fracture, for example, is one of the most devastating types of bone fracture injuries that can occur in a car accident. Here’s what you need to know about impaction fractures:

What Is An Impaction Fracture?

A fracture is simply a broken bone, but an impaction fracture, also known as an impacted fracture, is a bit more complicated. An impacted fracture occurs when two pieces of a fractured bone are driven into each other. Because it involves more than a break in the bone, it is more serious than a simple fracture.

It takes a significant amount of force to drive two fragments of a fractured bone together. For example, the force of a car accident is powerful enough to cause an impaction fracture. However, a minor fall would typically not produce enough force to cause this injury.

The symptoms of an impaction fracture can vary depending on the part of the body that is affected. But in general, the symptoms include:

The symptoms of an impacted fracture are hard to miss and typically appear immediately after the injury is sustained. If you notice one or more of these symptoms, seek medical attention right away.

Treating an impaction fraction involves more than simply wearing a cast or splint. Surgery is often needed in order to separate the two fragments of bone. Pins, rods, or other surgical hardware may be used to provide support and keep the two fragments separated. This surgical hardware prevents the two bone fragments from colliding with one another again during the healing process. After the surgery, you will need to keep the bone immobile while it heals.

Your treatment plan may also include physical therapy. A physical therapist can help you regain strength and mobility in the affected area so you can make a full recovery from your injuries.

Have you sustained an impaction fracture due to another driver’s negligence? If so, seek legal representation from attorney Martin Gasparian right away. Mr. Gasparian is committed to helping car accident victims maximize the compensation they are awarded for their injuries. Schedule a free consultation regarding your case by calling 559-203-3333 or submitting your information at MaisonLaw.com.